Saturday was gruesome, weather-wise; the plan had been to go on a field trip to Soldier’s Delight to look for skippers, but skippers don’t have much patience with a cold front that brings intermittent heavy rain and temperatures in the 60s.  But staying inside wasn’t my idea of fun either, and since my friend had heard that Fine-lined Emeralds had been seen down at Dyke Marsh, we decided we’d go for it.  Did I think there would really be emeralds there, in that weather?  No, but I figured there’s always something to see.

First to get the idea of emeralds out of the way: I’m talking about something much more appealing than jewelry:  the most beautiful dragonflies of them all, slim bodies like dark jade or patinaed bronze, and lurid, glowing – no, seriously – alien green eyes.  To stand in the middle of a river with one flying straight at you, standing hip-deep, spellbound, transfixed, by those eyes, and to have thing fly right at you, and to be convinced that you’ll finally catch it and get it see it up close, and then, just as you make eye contact – divine green insect! it makes a sudden 90-degree turn, and you whip your net and miss, and you land in the river, and you ruin yet another pair of close-focus Papilio binoculars, and yet, it’s well worth it.  Emeralds!

The trail out to the marsh was warm, but pretty quiet.  One Eastern Kingbird, looking scruffy and wet.  However, there was a mayfly, which taught me that you don’t just see mayflies in May.  Spending some time hanging over the railing on the boardwalk at the end of the trail rewarded us with a couple of Brown Water Snakes swimming back and forth in the water near the shore.  No emeralds.

However, it turned out – as sometimes it will turn out – that the best part of the day was the lawn by the parking lot.  It was 60 degrees F with a breeze off the river and intermittent rain, and a big puddle had formed in the middle of the lawn by the parking lot, big enough to host a dozen eclipse-plumage Mallards that I didn’t hesitate to misidentify as Gadwalls. In the vegetation around the puddle were a number of Big Bluets, which I was pleased to be able to point out to my friend; she hadn’t seen one yet.  Their hugeness makes them fairly unmistakable, once you’ve seen enough of the smaller ones. They sailed sideways among the partly submerged grass stalks in the light breeze, making them exasperating to photograph.  But they’re damselflies, so what else do you expect.  They weren’t doing much more than trying to feed, having most likely been blown away from their preferred location at the river’s edge.  There were also some Wandering Gliders, one female ovipositing slowly on the rain-spattered puddle’s surface; being a highly migratory species, these gliders’ larvae develop at a speedy pace, and they do prefer temporary pools; however, this puddle, as rewarding as it was for us, will likely turn out to have been too ephemeral for them. 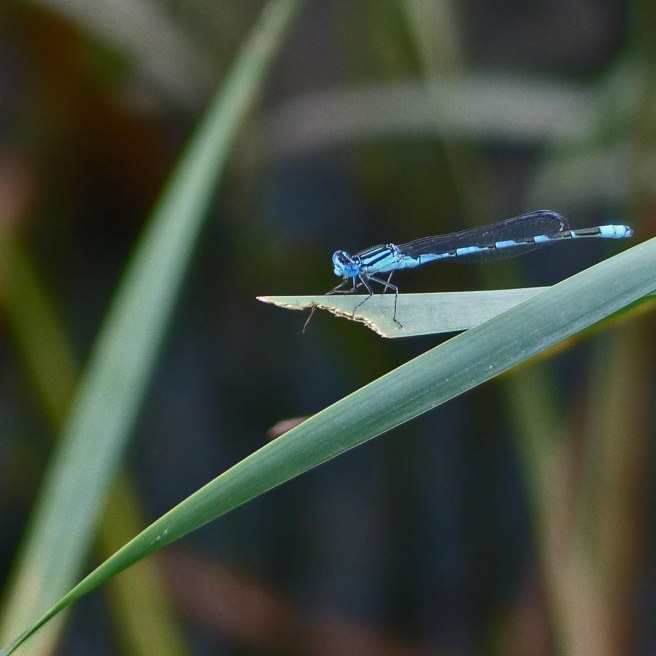 We showed up at the Rock Creek Park Maintenance Yard pretty late this morning; it was chilly and cloudy and pretty slow, birdwise. I ended up wandering off to look for Beech Drops, a nonphotosynthetic parasite of Beech trees that I’d first seen when doing research for the Eastern Forest Ecosystems class I took with the Audubon Naturalist Society last fall, but they weren’t where I remember seeing them (not to worry, though; this afternoon I read that they’re an annual that shouldn’t be expected until late summer.) However, instead I found some Bear Corn, which are like Beech Drops but instead parasitic on Oak trees.

Here’s a nice article on it by David Haskell, author of the marvelous The Forest Unseen. He tells us that this plant comprises a remarkably large component of the diet of bears in the Smokies and Shenandoah mountains. So now we know that if we start getting bears in Rock Creek Park, they’ll have something to eat other than birdwatchers.

Unfortunately I also noticed that lesser celandine is rampant in that section of Rock Creek Park.   I swear it wasn’t there last year; well ok, maybe I just didn’t notice it because I didn’t know about it until very recently.  It’s a plant that has pretty little yellow flowers in the spring and is the star of its own little horror movie; people who know about these things have known for a while that it’s a terrible problem. At first I was just seeing little patches of it here and there… then I noticed it covering both edges of the Valley Trail….

And then I walked to the edge of the hill, looked down the hillside, and saw this terrifying science-fictiony scene.

So there’s an unpredicted plot twist: You may have expected the parasites to  be the bad guys and the cute little yellow flowers to be the good guys, but not today.

If I had my way I would do everything by foot, bicycle, or public transportation and never set foot in a car again, but I realize that if I ever want to go outside the Beltway again I need to suck it up and get into the car. And although I am perfectly capable of living on a field lunch of cheese and crackers and sliced apples with a jar of iced coffee, sometimes it’s nice to stop. So along those lines, I’ve managed to find some nice little local places here and there. I figure you might as well go out of your way a tiny bit and stop at a nice little local place, since you’re driving anyway.

So here’s the first in what I intend to be a series: Places to Stop and Get Coffee or Lunch While You’re on a Nature Excursion Since You’re Driving Anyway.

someplace that’s reasonably fast. These will pretty much be places to grab a coffee, snack, or quick sandwich to go.  However, I’ll also list sit-down lunch places, since sometimes that’s a thing.  And despite my generally bad attitude about cars, as noted above we have to deal with the fact that if you’re looking at nature, you’re probably in a car… so it’ll be a place with convenient parking.

someplace where you won’t feel weird going in there wearing a baseball cap and field pants that are at least partly covered with mud. If the mud factor is exceptionally favorable — i.e., if you can go in there even if you’ve been looking for damselflies in a suburban industrial park pond and you smell like a sewer — I’ll tell you.

Vol. 1:  When You Need Coffee and You’re in Sligo Creek Park

Sure you could go to Starbucks, but here are some nice local alternatives for a cup of coffee and a snack if you’re headed to see those Yellow-crowned Night Herons.   And despite my guilt-ridden rigmarole about driving in the introductory section above, these two places are metro accessible (as is Sligo Creek Park itself, if you don’t mind a bit of a walk).

Silver Spring: Bump n’ Grind is a nice addition to the neighborhood.   This is a larger place with interesting music where you can camp with a laptop, if that becomes the agenda.  It has nice sandwiches.  Address:  1200 East West Highway.

One thing I was hoping to see this morning were the Yellow-crowned Night Herons, who have just returned to the park. I headed upstream to the place where we’d been seeing them last year. It was a little drizzly and cold, with only a handful of people on the trail, and I was walking fast, bopping along to this great song that was in my head (Sure as Spring by La Luz). Then I remembered that I need to work on not thrashing around so loudly all the time, crushing everything in my path. So I walked through the muddy grass to streamside with quiet, stealthy precision, and looked up… and looked around… and ok, then I remembered that they’re being seen in a different place this year. Instead of heading back for the herons I continued upstream, focusing on tree buds; I want to keep an eye on the trees that I learned to identify this winter as they shape-shift themselves into spring. It’s pretty impressive how quickly the change happens.

Look at the box elders – what are these things their buds have elongated into, these long dangling festoons of samaras! It took me a minute to even realize that that’s what I was looking at – wait, that thing with all the wiggy candelabras is a box elder?

And then the spicebush – how is it that I’ve never noticed them at this time of year, buds exploding everywhere in sharp yellow-green? Is it just because I didn’t know their name, that they were just “bushes”? So maybe I saw some nice green explosions on some “bush” but without that hook of a name (spicebush! Lindera benzoin!) the observation didn’t stick?  There’s something about learning their names that makes me feel like I know them well enough to be curious about them.  (Acer negundo! I’m loving your new hair!)

At some point I realized that I’d walked a couple of miles and should really turn around. And of course that’s when I remembered where those night herons are now: about two blocks from the point where I’d started. Equally ironically no stealth was necessary – they’re next to a tennis court at the corner of a deafeningly busy intersection. They sat close together up on the nest, seemingly oblivious to the screeching chaos below. Finally, here’s that great song that was stuck in my head.  They played an equally great show here in DC last month.  My only regret is that by the time they came on stage, I was stupefied with fatigue… I am way too old for shows where the headliner comes on at midnight.  But anyway, dance time: